Why All Aboard America! Charters?

ALL ABOARD AMERICA! has a distinguished history that dates back to 1936 when Henry Page formed the Potash Mines Transportation Company to transport potash miners to and from their jobsites in Southeast New Mexico. Trailers pulled by trucks were the original buses of the company. As the trailers traveled through the southwest, smoke stacks through the roofs of the trailers sent out puffs of smoke from pot belly stoves that kept the miners warm as they traveled.

Henry’s daughter Coradene and her husband Jack L. Wigley later formed Industrial Bus Lines, Inc. to expand the original business into West Texas and Arizona, merging the two companies in 1971. As Industrial Bus Lines continued to expand, it needed a new name to better identify the company and its wide array of services. In 1989, ALL ABOARD AMERICA! became the new company name.

Today ALL ABOARD AMERICA! is led by Jack L. and Coradene’s son Jack D. Wigley as President and CEO. Jack D’s vision and leadership has taken ALL ABOARD AMERICA! to new heights and has transformed the company into a major player in the motorcoach industry. ALL ABOARD AMERICA! is proud of its strong Southwest USA history and its family-oriented workplace. We pride ourselves in taking care of our dedicated team of employees as well as our valued customers who expect the very best service possible. Our mission is a unified effort to provide exceptional safety for everyone who steps aboard an ALL ABOARD AMERICA! motorcoach. 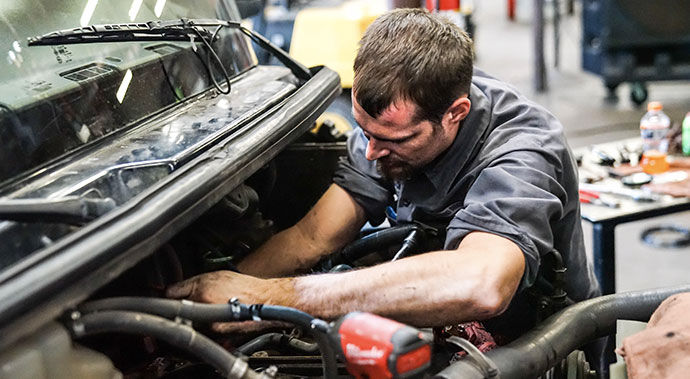 SAFETY IS OUR FIRST PRIORITY

All Aboard America! maintains the highest DOT safety ratings. We’re proud of all the hard work our team puts into prioritizing safety at all times. We even have our own in-house shop that ensures our fleet stays operating safely.

OUR PEOPLE ARE OUTSTANDING

Having tenured employees who love their jobs helps us serve you better. Looking to join our team? View our careers page now. 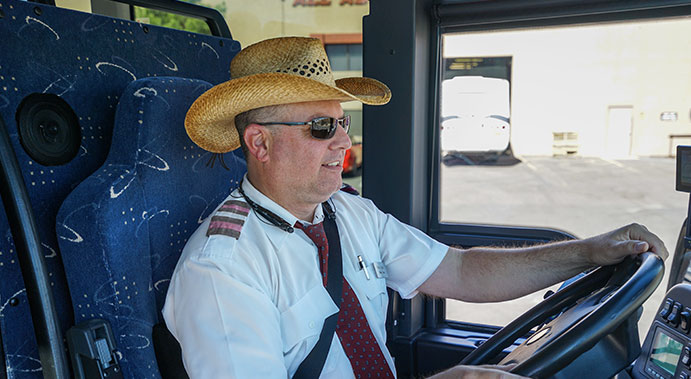 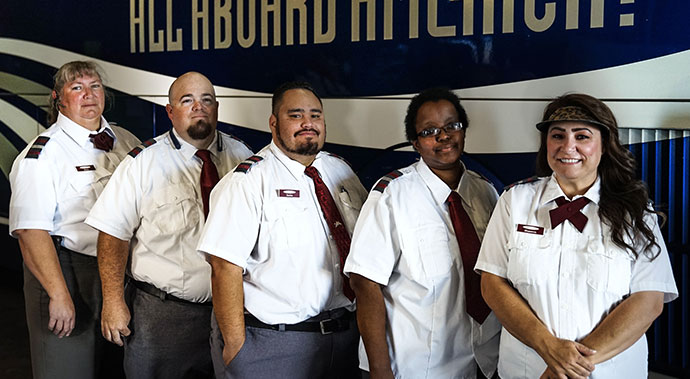 Your travel needs aren’t limited to a 9-5 schedule, so neither are we. Our team of highly trained dispatchers and mechanics are on-call 24/7. No matter the time of day or night, they’re ready to provide expert service.

TOP OF THE LINE AMENITIES

With amenities like WiFi, power outlets, reclining seats, and on-board restrooms, our modern motorcoaches are comfortable and convenient. 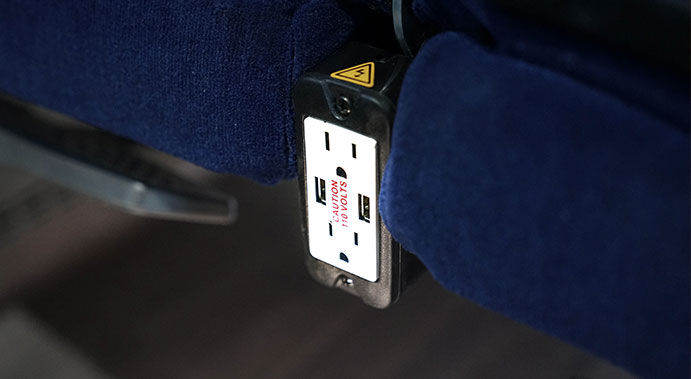 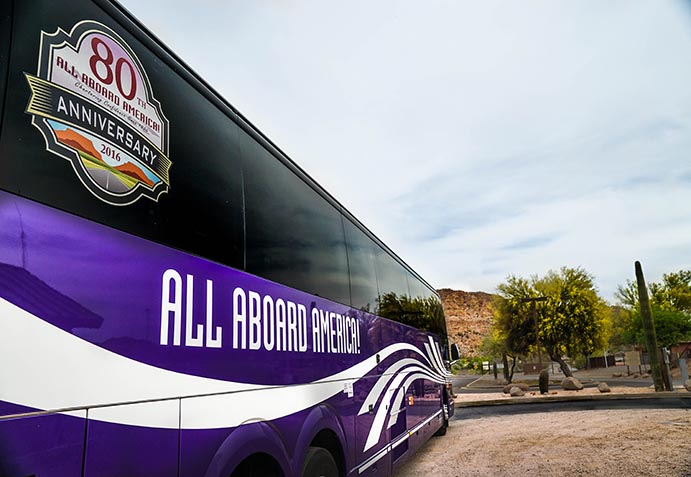 All Aboard America! is the recipient of the UMA Green Highway Award, the UMA Vision Award, the IMG Operator of the Year Award, and the UMA Motorcoach Industry Achievement Award. These awards demonstrate our commitment to protecting the environment and providing excellent service to our customers.

We provide customized charter bus rentals for groups of every type and size. From concerts and field trips, to corporate events and weddings, you can count on All Aboard America! for your group transportation needs.

Whether you’re looking for employee transportation for one day or every day, we’ve got you covered. Let us move your people.

All Aboard America! provides day trip service to local casinos like Harrahs’ AkChin and Inn of the Mountain Gods. We also provide custom overnight trips to Nevada casinos.

Here's What Our Clients Say

“I wanted to let you know that our Director of Ops reported back to us that they had a FABULOUS experience with your services in Phoenix! And especially had a big shout out to Shawn, their driver. In her words: “Our bus driver Shawn, was also amazing! by far the best one we have had to date” So, from Ashley and I here at Anthony Travel/UCF – huge thank you for all that you do for our teams.”

“The coach service provided by AAA was, as always, first class all the way, and Bob was a hit with my passengers. It’s a pleasure working with EVERYONE at AAA, and we’ll definitely be back again with another group.”

“Once again, we had an amazing trip. All Aboard America continues to show high quality and professional service.”

“We look forward to a long relationship with All Aboard America!”

“I want to thank you for all your help with the SCG Garden Club adventure to Palm Springs. It was perfectly executed by All Aboard America, from initial contact to the end. Everything was as promised!! Unusual these days.”

“Good morning! Zach Hawkins was just an AMAZING DRIVER! He is very knowledgeable, professional and patient. He is definitely an asset to your company. I am definitely telling all of my future sponsors to request him as a bus driver if they need to leave out of state. He really made our trip fun and exciting! All of our students had nothing but nice things to say about Zach! Thank you again,”

“Please convey our very best wishes to everybody, and many thanks for a job well done. You have a great team that worked hard to ensure that everything ran smoothly.”

“Your professionalism and willingness to help out making sure that everyone was taken care of was refreshing and commendable.”

“You made it a great experience that has them coming back for more – thank you!”

“We appreciate you excellent customer service, especially in finding the guide at such short notice!! Opportunities to work in your area don’t come around often but our vendor list there is a short one, All Aboard America is the only name on our list!”

“II wanted to thank you for the outstanding job you and your staff did for us at the recent Spring Training ’09 event in Phoenix. Gary, Jim and all of your drivers were very professional and did everything we asked in a top-notch manner. Your equipment was high quality and the participants noticed that. Of all the years I have been involved with these programs, your transportation service was the best I’ve experienced. Thank you for a job well done!”

“Rancho Solano has been chartering transportation with All Aboard America for over five years for trips as small as a Kindergarten field trip to a Fire Station all the way up to the 8th grade week long trip to Catalina Island. All Aboard America’s drivers are professional and friendly at all times with the Rancho students and staff; and every trip goes off without a hitch! With any trip, Rancho Solano’s first priority is safety on all fronts and especially when it comes to the transportation of our students; and we know that when we travel with All Aboard, our students are in good hands.”

Meet the Rest of the All Aboard America! Family